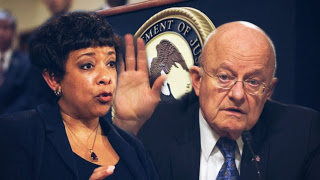 According to new documents obtained by American Center for Law and Justice (ACLJ), Clapper’s DNI were rushing to get new raw intel-sharing procedures approved and signed by the attorney general shortly before Trump took over office.

GATEWAY PUNDIT - On December 15, 2016, after Trump won the election, DNI James Clapper executed a document entitled “Procedures for the Availability or Dissemination of Raw Signals Intelligence Information by the National Security Agency Under Section 2.3 of Executive Order 12333.” On January 3, 2017, then-Attorney General Loretta Lynch executed the document. These new documents show how desperate Clapper and Lynch were to get this done in a hurry before Trump was sworn into office.

ACLJ - The American Center for Law and Justice (ACLJ) obtained records that show that the Office of the Director of National Intelligence (ODNI), under Director James Clapper, was eager and actively pushing to get its new procedures in place increasing access to raw signal intelligence before the conclusion of the Obama Administration and before President Trump took office.
The documents also reveal that ODNI’s Robert Litt told Office of the Undersecretary of Defense’s Director of Intelligence Strategy, Policy, & Integration (and also USDI’s Liaison to ODNI):  “Really want to get this done . . . and so does the Boss.”
And, documents produced to the ACLJ by the NSA in this lawsuit show that NSA officials discussing that they “could have a signature from the AG as early as this week, certainly prior to the 20th Jan.” In other words, certainly before President Trump’s Inauguration.

Ilhan Omar About To Lose Congressional Seat Over 9/11 Comment

NEW YORK POST - A veteran Minneapolis cop and decorated US Army vet will run as an independent to challenge Democratic Rep. Ilhan Omar — and said Friday that her comments about 9/11 prompted his decision. According to the veteran, “September 11 was a terrible loss of life, not just for police officers and firefighters […]

FOX NEWS - Billionaire Jeffrey Epstein has been charged with sex trafficking underage girls in New York and Florida. The 66-year-old financier has long been plagued by allegations of sexual abuse against minors. Epstein’s case is part of a joint FBI - NYPD investigation in New York and is expected to be publicly announced on Monday. This is a big case: https://t.co/FCRbT7C2Zo […]

FOX 5 - U.S. Immigration and Customs Enforcement deportation officers arrested 20 people with final removal orders throughout San Diego County this week, the agency announced Friday. In addition to those targeted in the operation, officers also arrested seven immigration violators, whom they took into ICE custody and processed for removal. ICE arrests 20 in […]