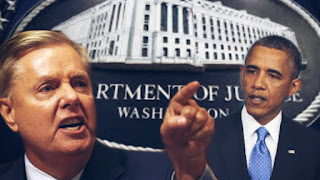 During an appearance on Sean Hannity’s Fox News show on Wednesday night, Senate Judiciary Committee Chairman Lindsey Graham (R-SC) claimed he has every intention bringing in former President Barack Obama to answer questions as to the parts he was involved in the spygate operation.

Speaking with the Fox News host, the Republican senator claimed he is pushing forward with his investigation into who told President Obama about the counterintelligence investigation into then-candidate Donald Trump. “I can’t imagine an investigation of the Republican nominee for president – a counterintelligence investigation of his campaign – – was not approved at the highest level,” Graham claimed. “I cannot imagine it happening without somebody in the White House knowing about it.” When Hannity asked if that meant asking Obama questions under oath, Graham seemed open to the idea. “Absolutely,” Graham replied.

Senator Lindsey Graham just issued a warning over President Trump’s border emergency that those who lead the GOP need to pay attention to, and act upon. (Breaking; Heads About To Roll, Hillary PETRIFIED, Trump Launch official ATTACK On Deep State Operatives)  Senator Graham of South Carolina said in an interview with Fox News Maria Bartiromo, […]

Hillary Clinton left, James Comey rightImage credit: vox.com, premiumtimesng.com In a new bombshell revelation, it was discovered that James Comey lied about having reviewed  all of Hillary Clinton’s emails. Out of hundreds of thousands of emails found on Anthony Weiner’s laptop, only 3,000 emails were individually examined for classified information and incriminating evidence. The most […]

Democratic leaders threaten to restructure the U.S. Supreme Court if decisions are not made in their favor, Senate Judiciary Committee Chairman Lindsey Graham came out blazing, when he said “Over my dead body, it’s not going to happen.” Just before adding that, by their actions, Democrats plan on “telling every rural american to go […]