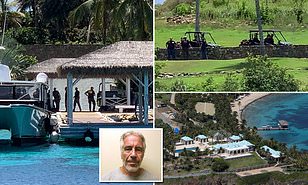 MAIL ONLINE – A large group of FBI officers were seen disembarking speedboats at the pier of Little St James on Monday morning and driving around on golf carts after the 66-year-old was found dead by suicide in his New York jail cell early on Saturday morning.

Other officials with ‘FBI’ lettering on clear display were later seen overlooking the crystal blue sea from the top of Epstein’s remote luxury home off the coast of St Thomas. The search comes after 2,000 pages of documents detailing the lurid allegations of his sexual abuse ofunderage girls were unsealed to the public on Friday, adding more fuel to the fire of the government’s case of sex trafficking against Epstein. [MAIL ONLINE added]
MAIL ONLINE has more

Springtime may be a time for rebirth and hope, but it’s also a time when heavily bankrolled presidents vanquish the out-party nominee.” “Except, this year, that’s impossible. Trump clearly has his hands full with a major crisis. What is more, the seriousness of this pandemic (and the fact that Trump has already botched […]

The Israeli legal NGO Shurat HaDin filed a petition in a Jerusalem court earlier seeking to block US Rep. Ilhan Omar (D-MN) from being allowed entry into the Jewish state. The Times of Israel reports that Shurat HaDin asked the Jerusalem District Court to demand that Interior Minister Aryeh Deri deny Omar’s entry during her visit to Israel with […]

New Jersey Sen. Cory Booker endorsed Joe Biden for president on Monday, the latest high-profile supporter to back the former vice president. “The answer to hatred & division is to reignite our spirit of common purpose. @JoeBiden won’t only win – he’ll show there’s more that unites us than divides us,” Booker tweeted. “He’ll restore […]