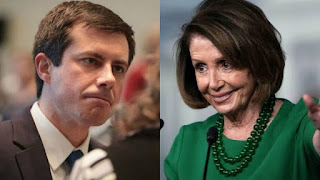 On Tuesday, Mayor Pete Buttigieg’s of South Bend Indiana got his ass handed to him with a law suit filled by Judicial Watch for records pertaining to the creation of identification cards meant to assist people living in the U.S illegally.

NationalSentinel – Judicial Watch, in a press release, noted that on December 16, 2016, the South Bend Tribune reported that, “A nonprofit Latino advocacy group … unveiled a new identification card it hopes will make life easier for undocumented immigrants who live in [South Bend].” La Casa de Amistad Inc. are the creators of this “SB ID.” Mayor Pete Buttigieg, a 2020 Democratic presidential contender, reportedly worked “closely with La Casa de Amistad, South Bend’s main Latino outreach center … and the nonprofit’s executive director, Sam Centellas,” to create a “Community Resident Card … created and distributed by the group — a private organization — not the city.”
“Buttigieg’s part to make it all work was to sign an executive order requiring local services and institutions — like law enforcement, schools, the water utility and libraries — to accept the card as a valid form of identification,” the paper noted. The legal watchdog’s lawsuit comes in response to the city’s failure to respond to an open records request sent June 22. That request sought emails between Buttigieg, members of his staff and officials of La Casa de Amistad regarding the Community Resident Card program.

Prior to that, the city also refused Judicial Watch APRA requests for similar public information multiple times between June 24, 2019, and July 18, 2019. In each of those refusals, South Bend said the requests were too broad and not “reasonably particular.” “Mayor Buttigieg’s city administration in South Bend is in cover-up mode on his work for special ID cards to make it easier for illegal aliens to stay in the United States contrary to law,” said Judicial Watch President Tom Fitton.

President Trump took to Twitter to tout the ratings of his coronavirus news conferences. Said Trump: “Because the ‘Ratings’ of my News Conferences etc. are so high, ‘Bachelor finale, Monday Night Football type numbers’ according to the @nytimes, the Lamestream Media is going CRAZY.” After his initial tweet, he sent four follow-up tweets quoting from a New […]

Earlier in May, president Trump blasted FBI Director Christopher Wray for protecting the Democratic deepstate swamp. ….and the Democrat National Committee-The Democrat Party apparatus-has been caught using donor Dollars to Collude with Russian Intelligence to attack a domestic political opponent (me). The FBI has no leadership. The Director is protecting the same gang…..that tried to…. […]

18 Replies to “Top Democrat Indicted Over Dealings With Illegal Immigrants”