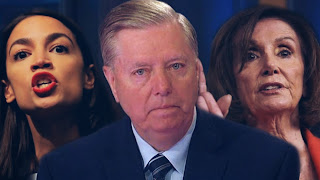 Democratic leaders threaten to restructure the U.S. Supreme Court if decisions are not made in their favor, Senate Judiciary Committee Chairman Lindsey Graham came out blazing, when he said “Over my dead body, it’s not going to happen.” Just before adding that, by their actions, Democrats plan on “telling every rural american to go to hell.”

South Carolina Sen. Lindsey Graham rebuked plans by some Democrats to add seats to the Supreme Court and to do away with the Electoral College, in comments during an interview with Fox News’ Maria Bartiromo on Sunday morning. Before transitioning of the Electoral College happens, Sen. Lindsey Graham promised it’ll be over his dead body. “Over my dead body, it’s not going to happen.” Graham said.
Senate Judiciary Committee Chairman Lindsey Graham previously warned that Democrats plan to destroy this system, so they can decide who the President is, telling the rest of the rural america to “go to hell.” “The Electoral College allows rural America to have a say about picking the president,” “When they want to do away with the Electoral College, that’s telling every rural American to go to hell. That would mean that Los Angeles and New York would decide who’s the president.
According to previous reports, Democratic leaders have threaten to destroy the U.S. Supreme Court if decisions are not made in their favor. Now Rep. Alexandria Ocasio-Cortez, democratic sweet heart and a member of ‘The Squad’ just reiterated the threat by claiming this time, that the Electoral college needs to be abolished because it is racist and is bad for minorities.
According to The Hill – Ocasio-Cortez blasts Electoral College as a ‘scam’ First-term Rep. Alexandria Ocasio-Cortez (D-N.Y.) is calling for the U.S. to abolish the Electoral College, saying that the voting system is a “scam” that negatively impacts minorities. Ocasio-Cortez made her argument on Monday in an Instagram story that includes her driving along a deserted highway and quipping, “many votes here, as you can see.” Read more

George Soros (left), Nancy Pelosi (right) Right after spending a whooping $17 million  in donation to backup the Democratic party during the 2018 midterm election, liberal billionaire donor George Soros is about to make one decision that will be devastating for the Democrats during the upcoming 2020 presidential election. This will be the most devastating […]

Dem’s. In TOTAL SHOCK, Pelosi And Others Loosing Sleep Over What Trump Just Did (VIDEO)