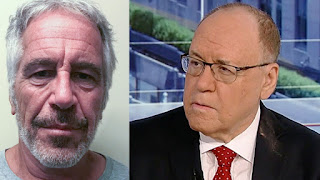 An autopsy found that financier Jeffrey Epstein sustained multiple breaks in his neck bones, according to two people familiar with the findings, deepening the mystery about the circumstances around his death. Among the bones broken in Epstein’s neck was the hyoid bone.

According to Dr. Mark Siegel, “It certainly increased the chances that this was a murder than a suicide. The hyoid bone which is right here in the neck, a U-shaped bone… might break in strangulation about one-third to one-half of the time. In suicide, hanging, it might break 6-10% of the time, and in some cases much less percentage. But in order to break that bone and multiple bones in the neck, you have to exert a lot of force if it’s a hanging.”

Alfredo Rodriguez, the former butler of disgraced billionaire Jeffrey Epstein was found dead before taking a plea deal that involved giving up a black box, containing all of Epstein’s sexual dealings with hundreds of underaged girls and his fleet of billionaire clients. Apparently, Epstein was also found dead, after the court un-sealed over 2,000 previously […]

A man identified in court records as “John Doe” alleges in a new lawsuit that former New York Rep. Gary Ackerman sexually abused him when he was a teenager. The plaintiff says Ackerman exploited him in 1966 when the former Democratic congressman was a director at Ten Mile River Scout Camp. The victim, who was 17 at the […]