Just In!! New Info On Epstein's Death Drops Bombshell On Clinton, Others; It's Not Over Yet - TruthSeries
Skip to content 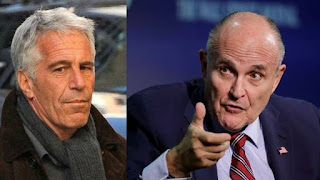 With Jeffrey Epstein’s death bringing more attention to the ‘Deep State’ and their horrendous ability to silence witnesses before they appear in court, Epstein’s supposed ‘Suicide’ is turning into a nightmare for the powerful elites. Speaking on live TV, a top U.S attorney said Epstein might be dead, but its not over. Clinton and his accomplice still faces justice.

Rudy Guiliani, another top attorney said; “Committing suicide on suicide watch doesn’t happen.” In a tweet on Sunday, Guiliani asked lots of unanswered questions. He said – “What does the word suicide mean in the phrase suicide WATCH? Who was watching? Did they fall asleep? Did the camera malfunction? Was there camera surveillance? Who was he about to implicate? This is very questionable. Committing suicide on suicide watch doesnt happen.”
NBC News reported that Epstein was “not on suicide watch at the time of his death,” but that is yet to be confirmed. Jeffery Epstein who happens to be a highly profiled prisoner with ties to dangerous elites and was on suicide watch, apparently died with no cameras pointing into his cell and no footage to clear up every reasonable doubt. Jeffrey Epstein’s autopsy report was supposed to be released Sunday evening, however the NYC medical examiner’s office said it needs “further information” before determining a cause of death. “The New York City Medical Examiner Says the “determination is pending further information at this time” as to Jeffrey Epstein’s death” according to NBC News. But suicide still remains the presumed cause of death.
NYP also reported that one MCC inmate even said there is “no way” Epstein killed himself. “There’s no way that man [Epstein] could have killed himself. I’ve done too much time in those units. It’s an impossibility. Between the floor and the ceiling is like eight or nine feet. There’s no way for you to connect to anything. You have sheets, but they’re paper level, not strong enough. He was 200 pounds — it would never happen. When you’re on suicide watch, they put you in this white smock, a straight jacket. They know a person cannot be injurious to themselves. The clothing they give you is a jump-in uniform. Everything is a dark brown color. Could he have done it from the bed? No sir. There’s a steel frame, but you can’t move it. There’s no light fixture. There’s no bars.”

Senate Judiciary Committee Chairman Lindsey Graham, R-S.C., is adamant about revealing what went on behind the scenes of the Russia investigation and is looking forward to the American people learning about what happened. While speaking to Fox News host Maria Bartiromo on Sunday Morning Futures, Senator Lindsey Graham said – ” believe the Horowitz report will be […]

Trump scare shows no American is immune from coronavirus risk

The White House insists President Donald Trump doesn’t need a coronavirus test, despite several members of his political circle self-quarantining after they came into contact with a man later diagnosed with the disease. They include Florida GOP Rep. Matt Gaetz, who rode in “The Beast” limousine with Trump in the Sunshine State on Monday, before […]

President Trump took to Twitter to tout the ratings of his coronavirus news conferences. Said Trump: “Because the ‘Ratings’ of my News Conferences etc. are so high, ‘Bachelor finale, Monday Night Football type numbers’ according to the @nytimes, the Lamestream Media is going CRAZY.” After his initial tweet, he sent four follow-up tweets quoting from a New […]

11 Replies to “Just In!! New Info On Epstein’s Death Drops Bombshell On Clinton, Others; It’s Not Over Yet”