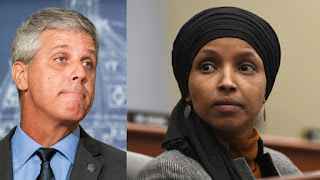 State Rep. Steve Drazkowski (R-MN-21B) issued a call for an ethics investigation of U.S. Rep. Ilhan Omar. Drazkowski, from Mazeppa, issued the challenge to U.S. Rep. Angie Craig (D-MN-02) during a press conference when he called for the withdrawal of Omar’s security clearance and for her removal from the House Committee on Foreign Affairs.

Drazkowski said in a press release “Rep. Omar has been found guilty of campaign finance abuses by the Minnesota Campaign Finance Board (CFB), which is expected to take further action against her on Wednesday. In addition to previous campaign finance abuses, Rep. Omar was found on June 6, 2019 to have illegally used campaign funds for personal use and illegally diverting campaign funds for travel to Washington, Boston, New York, Chicago, and Florida. Rep. Omar may be guilty of federal tax fraud, federal immigration fraud, federal student loan fraud, perjury, and bigamy. Enough is enough. “The media is applying a double standard to Rep. Omar,” Drazkowski said. If a Republican Congresswoman had been accused of all these crimes, reporters would be in an uproar. Rep. Omar is a serial criminal, and our national security is at stake. “It is time to yank her access to America’s highest levels of security access and briefings. Minnesota deserves better, and America demands more.”

Also conservative watchdog group Judicial Watch filed a complaint with the House of Representatives’ ethics office asking for an investigation into possible crimes committed by Minnesota Democratic Rep. Ilhan Omar. The possible crimes include “perjury, immigration fraud, marriage fraud, state and federal tax fraud, and federal student loan fraud,” according to the complaint filed Tuesday by Judicial Watch’s Tom Fitton. Judicial Watch wrote to the Office of Congressional Ethics: “We call upon the Office of Congressional Ethics to launch an investigation into Rep. Omar’s conduct immediately.”

A new petition on the White House websites is demanding the Trump administration investigate freshman Democrat congresswoman Ilhan Omar amid widespread allegations that the Muslim lawmaker married her brother to skirt immigration law. The request titled, “We The People, call on Congress to immediately start an investigation into Ilhan Omar’s illegal citizenship status,” was posted […]

Trump Issues Warning To Ilhan Omar, Others “Go Back To Your Country And Fix It”

Earlier, in what was widely denounced as a racist attack by most Democrats President Trump lobbed a huge ball of truth at a group of four Democratic congresswomen of color who have been critical of his administration’s policies. President Donald Trump defended his attacks on the four freshman Democrats at a White House event on manufacturing, arguing […]

According to the FederalistPapers, Obama’s former ICE Chief during an interview admitted Obama may have personally came up with the decision to use cages at detention centers in the first place. In an effort to demonize President Trump, Alexandria Ocasio-Cortez led the charge in calling the detention centers “concentration camps.” Now Thomas Homan Obama’s executive […]