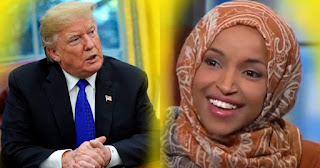 Congresswoman Ilhan Omar (D-Min) responded earlier to “send her back” chants that erupted at one of President Donald Trump’s rallies by posting a photo of herself and Speaker Nancy Pelosi on a visit to Africa.

“They said ‘send her back’ but Speaker [Pelosi] didn’t just make arrangement to send me back, she went back with me,” Omar wrote in her Instagram and Twitter posts.

They said “send her back” but Speaker @SpeakerPelosi didn’t just make arrangements to send me back, she went back with me ✊?

So grateful for the honor to return to Mother Africa with the @TheBlackCaucus and commemorate The Year of Return! #Doorofreturn #Ghana pic.twitter.com/0yVBLcAEs5

Pelosi was in Ghana with Omar and the 13 other members of the Congressional Black Caucus to commemorate the 400th anniversary of the arrival of enslaved Africans in America. Omar shared several other photos of the trip on Instagram.
Ghana’s Leader, Nana Akufo-Addo, declared 2019 “the Year of Return” – a commemoration that is meant to encourage people of African ancestry to make the “birthright journey home for the global African family”.

The “send her back” line was referring to the chant attendees of President Trump’s rally last month in North Carolina broke into after Trump mentioned the congresswoman’s name. The rally chant drew widespread condemnation from Democratic lawmakers and some Republicans, coming after Trump in a series of tweets told Omar and three other minority progressive female lawmakers to “go back” to the countries they came from.

Elizabeth Warren Dragged Out Over Endorsement Of Illegal Immigrants.

Elizabeth Warren has endorsed the most insane immigration idea ever in the history of the United States aimed at making it “no longer a federal crime” to cross the border and migrate to the US without papers. Warren even went a little further in saying she’d also support getting rid of the companion law that […]

Rep. Jim Jordan said Thursday that former Special Counsel Robert Mueller’s failure to answer many important questions underscores the importance of the Justice Department’s investigation into the origins of the Russia probe. Jordan, R-Ohio, grilled Mueller on Capitol Hill Wednesday, accusing him of selective prosecution methods and promising Attorney General Bill Barr would get to […]

16 Replies to “Ilhan Omar Leaves America After “Send Her Back” Chants, Drops Message For President Trump”