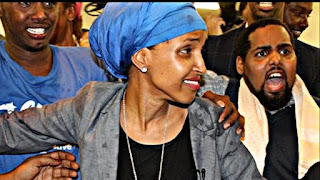 Recent findings shows That Ilhan Omar didn’t just use campaign funds for personal expenses, but she also paid a sum of $250k to her alleged lover Mynett. Mynett now resides in a $3000 monthly suite.

AlphaNewsmn – “Mynett is married to Dr. Beth Mynett, but the Daily Mail confirmed that he has left their marital home and is living in an apartment in Washington D.C that costs about $3,000 a month.” “Mynett has previously worked for Keith Ellison, Minnesota’s current Attorney General, when he was in Congress as his National Finance Director. Now, he works as a partner at E Street Group, a company that says it provides national progressive strategies for candidates, nonprofits and advocacy efforts.”

“Omar’s campaigned has paid Mynett’s company, E Street Group, for that $250k in travel and consulting fees that go back as far as August of 2018 and end in June of 2019. Omar’s team has refused to give details on what E Street Group does for her campaign.” AlphaNewsMN added.
In recent days, Omar have been accused of marriage fraud, tax fraud among other immigration crimes by a Conservative watchdog group Judicial Watch. More information are gaining traction by the day and with enough convincing facts as to why many Democrats from Omars district thinks she should be kicked out of the office she occupies.

Florida Is Only State to Receive Everything It Asked For

Many states have requested ventilators, face masks and other essential equipment from the federal emergency stockpile as their hospitals ramp up for the coronavirus pandemic, but only Florida has gotten 100 percent of what it asked for, the Washington Post reports.

Attorney General William Barr has ordered the immediate removal of acting US prisons director, this massive decision came after Epstein, a 66-year-old financier, was found dead in his Manhattan jail cell earlier this month as he awaited trial on charges of sex trafficking of minors and sex trafficking conspiracy. In a statement Monday, the attorney […]

just months into his presidency, a small circle of senior White House advisers met with Donald Trump about a carefully curated list containing the names of dozens of perceived political opponents, particularly leakers, working inside the government. A detailed account of the meeting was revealed for the first time to CNN by two former senior […]

7 Replies to “Ilhan Omar Caught Up In Fresh $250,000 Campaign Fund Fraud According To Latest Auditing”