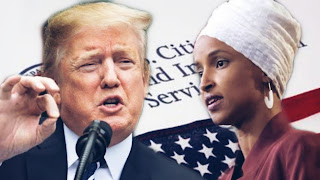 Days after encouraging Rep. Ilhan Omar to go back to her birthplace Somalia, President Donald Trump weighed in publicly on allegations that she had married her brother to skirt immigration laws, a charge she has vehemently denied.

“There’s a lot of talk about the fact that she was married to her brother. I know nothing about it,” Trump said Wednesday in answer to a reporter’s question. “You’ re asking me a question about that. I don’t know, but I’m sure that somebody would be looking at that.” Trump’s remarks on the South Lawn of the White House were the first time he has discussed an highly publicized accusation that has been long championed by conservative opinion journalists and some GOP watchdog organization. The accusation surfaced again as part of a recent investigation of state campaign finance violations stemming from her 2016 run for the Minnesota House. Documents released in that probe showed that Omar filed federal taxes in 2014 and 2015 with her current husband, Ahmed Hirsi, while legally married to but separated from ex-husband Ahmed Nur Said Elmi.

According to the Detroit News, on Monday, Rep. Rashida Tlaib (D-Mich.) visited Detroit’s “Real-Time Crime” center, which uses cameras and computer software equipped with facial recognition technology placed on traffic lights, businesses and streets around the city. Tlaib was invited to tour the facility after she discovered that the city she represents was using the notoriously […]

On the 18th anniversary of 9/11, freshman Muslim Congresswoman and member of the HAMAS Caucus Rep. Rashida Tlaib (D-MI), was served with a lawsuit for allegedly assaulting Laura Loomer, who is Jewish, this happened in Minnesota when Loomer was covering a joint campaign event for then-candidates Ilhan Omar (D-MN) and Rashida Tlaib (D-MI). Laura Loomer […]

TRUMP CALLS FOR IMPRISONMENT OF DEPUTY A.G. ROSENSTEIN, OBAMA, OTHERS

Deputy AG Rod Rosenstein left, President Trump right This came as a shock to all democrats and left minded Americans as President Donald Trump went on tweeter promoting what should have been done a long time ago. President Trump on Wednesday morning in a re-tweet, promoted calls for the imprisonment of Deputy Attorney General Rod […]

5 Replies to “Finally!!! Trump Weighs In On Ilhan Omar’s Immigration And Marriage Scandal”