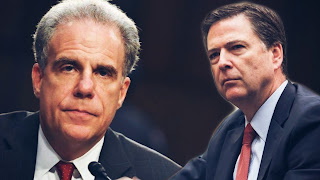 While speaking with Laura Ingraham on “The Ingraham Angle” Wednesday night, Trump’s Attorney and former New York City Mayor Rudi Giuliani stressed how the former FBI Director committed perjury and Could be locked up for 3 to 4 years as the two discussed the imminent release of the Comey Report by Inspector General Horowitz which is expected any day now.

“This is a counter intelligence conspiracy… Comey played his part as a liar to the court. It’s no confusion about a crime. There’s nothing clearer than you are swearing to under penalties of perjury, name – James Comey, paragraph such-and-such, a total lie. Go to jail… What a phony. What a total phony. He will have plenty of opportunities, three-four years of federal prison writing about this and then we can read about… You don’t get to commit perjury and get away with it. Not if you put people in jail for it.” Giuliani said.

James Comey and Jim Jordan Jim Jordan, the U.S. Representative for Ohio’s 4th congressional district and the ranking Republican member of the House Oversight Committee. In an interview with Fox News Maria Bartiromo on Sunday Morning, further debunked the the Adam Schiff Democratic memo which was released in February 2018. The memo was released as […]

High-ranking FBI are planning damning Intel drops in an attempt to further discredit FBI Director Christopher Wray. Wray was previously brought under the radar, exposed to have used the power of his office to block thousands of outstanding documents against his ‘Trump-Hating’ predecessor (James Comey) and other corrupt FBI employees from being released. True Pundit reported: A powerful […]

James Comey NEWSWEEK – Former FBI Director James Comey found himself facing a torrent of mocking tweets after he attempted to join in on the #FiveJobsIveHad Twitter trending topic Saturday morning. The hashtag trend, in which users share five professional titles they’ve held, has been percolating online since mid-April. For the most part, Twitter users […]