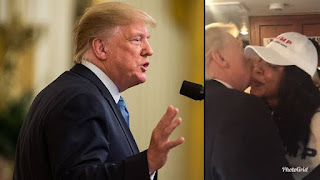 GATEWAY PUNDIT – Alva Johnson, a former campaign staffer when Donald Trump was running for president in 2016, claims that she was the victim of an unwanted and forcible kiss from Trump before a rally in Tampa.

According to Johnson “Trump moved close enough that i could feel his breath on my skin when i suddenly realized Trump was trying to kiss me on the mouth, i attempted to avoid this by turning my head to the right but Trump kissed me anyways on the corner of my mouth.”
BUSINESS INSIDER – On Wednesday, Charles Harder, one of Trump’s attorneys, uploaded a 15-second video clip of what he and Johnson’s attorneys had both identified as the alleged incident. Harder described the video as “undeniable evidence that [Johnson’s] battery claim is unfounded and frivolous by virtue,” according to court documents.

According to Charles Harder “The only conclusion a reasonable person could reach is that the exchange was an innocent moment between a dedicated campaign staffer and the candidate for whom she was working, the Video proves that Plaintiff has no legitimate claim for battery, it also proves that Plaintiff and her counsel have lied repeatedly to this Court.”

A restless Trump wants to end the country’s isolation

He’s sitting through glitchy conference calls, and friends say he’s thinking about his job security. Cabin fever amid the coronavirus pandemic has set in and tensions on the team are brewing. No one quite knows when it will end. As Americans enter another week of self-isolation, President Donald Trump is enduring the same Covid-era hazards […]

“Joe Biden has emerged as Democrats’ top choice for the presidential nomination in a new ABC News/Washington Post poll, but with only bare majority support within his party and a massive enthusiasm gap in a November matchup against President Trump.” “Indeed, strong enthusiasm for Biden among his supporters – at just 24% – is the […]

President Donald Trump signed into law Friday the $2 trillion rescue plan to salvage a US economy crippled by the novel coronavirus, on a day the nation’s total count of COVID-19 cases surpassed 100,000. Trump’s signature brings an end to a dramatic, weeklong legislative saga on Capitol Hill and triggers the distribution of millions of […]