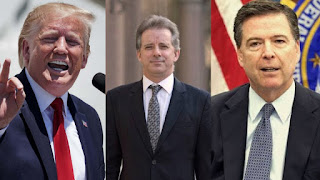 THE HILL – There is evidence Steele told the DOJ in July, and the State Department in October, about all of these flaws in his work, and that State officials even detected blatant inaccuracies in his intelligence.

According to John Solomon, “Multiple sources familiar with the FBI spreadsheet tell me the vast majority of Steele’s claims were deemed to be wrong, or could not be corroborated even with the most awesome tools available to the U.S. intelligence community. One source estimated the spreadsheet found upward of 90 percent of the dossier’s claims to be either wrong, nonverifiable or open-source intelligence found with a Google search.”
And yet, the FBI continued to use the fake document anyway to spy on Trump and his campaign, transition team and administration.

How Mueller’s Office Covered Up For Peter Strzok And Lisa Page By Deleting Key Text Messages.

GATEWAY PUNDIT – According to the IG report, the text messages sent between Lisa Page and Peter Strzok about the Mueller probe were ‘lost’ because their phones were conveniently reset to ‘factory settings’ by someone in the DOJ. In other words, Mueller’s team obstructed justice when they deleted the Strzok-Page text messages and scrubbed their phones. […]

Xiaochen said she was 14 when she had her first cosmetic procedure — liposuction paid for by her mother to reduce fat from her thighs. At the time, she said she had been diagnosed with an autoimmune disease that required her to take glucocorticoids, a class of steroid hormones. “I had put on […]

Most Disapprove of Trump’s Handling of Crisis

A new ABC News/Ipsos poll finds a majority of Americans, 54%, disapprove of President Trump’s handling of the response to the coronavirus, while 43% approve.