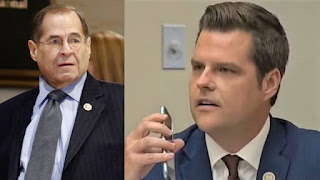 The audio contains an exchange between Dem. House Majority Whip Jim Clyburn, the third-highest ranked Democrat in the House, and a CNN host.
The CNN host asked Clyburn if he agreed with the president that there was a “humanitarian crisis” at the border. Finding it funny, Clyburn chuckled and laughed before saying “absolutely not.”
Although the clip was short, Rep Gaetz played the loop over and over again, an act which triggered fellow Pennsylvania Democratic Rep. Madeleine Dean, calling it offensive. Rep. Dean was shut down by fellow Dem chairman Jerry Nadler and the time was given back to Republican Rep. Matt Gaetz.

Rep. @MattGaetz ticks off his Democratic colleagues by playing back their own callousness about the border—again and again and again: pic.twitter.com/LEmkhEIArZ