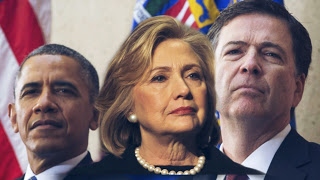 The presidential campaign of Hillary Clinton and the Democratic National Committee paid for research that was included in a dossier made public in January that contains salacious claims about connections between Donald Trump, his associates and Russia. The 35-page dossier, spiced up with tales of prostitutes and spies, sketched out a hair-raising story more than two years ago.
PATRIOT NEWS ALERTS - Quite frankly, it is pretty amazing it took this long for someone to go after Hillary on this issue. The lawsuit is centered around the Steele dossier. After the dossier was abandoned by a Never Trump conservative, an attorney representing both the Hillary Clinton campaign and the DNC ponied up the cash for the dossier. While Fusion GPS was the organization that brokered the deal, the dossier itself was put together by British national Christopher Steele. It is against election laws for any candidate to accept anything of value from a foreign national.

This is coming as a nasty shock to Hillary Clinton and the Democratic National Committee because at some point they thought they will be walking free.

It may be time for ‘Old Elijah Cummings’ to resign after all. More than 20years in service to the people of ‘Baltimore’ and nothing to show for it, Newly surfaced video expose Elijah Cummings. Put an end to the “Corruption”. The Trump campaign uncovered video Wednesday of Maryland Democratic Rep. Elijah Cummings calling his district […]

According to GATEWAY PUNDIT, Attorney General William Barr released a statement Saturday on the investigations into the death of Jeffrey Epstein in an apparent suicide while in federal custody at the Manhattan Correctional Center in New York City early Saturday morning. From The United States Department Of Justice - Attorney General William P. Barr issued the following […]

2 Replies to “Massive LAWSUIT Filed Against Hillary And Her Campaign”