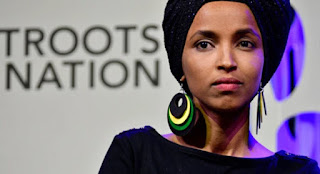 A new Bombshell Revelation published by Powerline blog on Thursday alleges Rep. Ilhan Omar not only married her brother to curtail U.S. immigration law, but received asylum from Somali as a child after her family used a false name.
In other words, Rep. Ilhan Omar entered the country fraudulently in 1995 as a member of the “Omar” family, which allegedly isn’t her real family.

The article was published by David Steinberg on Thursday atPowerline. Steinberg was formerly an editor of PJ Media who has written extensively on Omar in the past.
According to Steinberg’s claims as published in the article, “In 1995, Ilhan entered the United States as a fraudulent member of the ‘Omar’ family. That is not her family. The Omar family is a second, unrelated family which was being granted asylum by the United States. The Omars allowed Ilhan, her genetic sister Sahra, and her genetic father Nur Said to use false names to apply for asylum as members of the Omar family.”

Steinberg went further to say “Omar’s real name, before applying for asylum, was Ilhan Nur Said Elmi.” Steinberg cites as his sources multiple members of the “Minneapolis Somali community,” who claim that Omar was born as Ilhan Nur Said Elmi, as well as marriage records, address records, court documents, and online communications that he provides pictures of in his article.
If Steinberg’s research and allegations prove to be true, it would sure seem that Ilhan Omar has no regard for US law and yet there she is, “serving” in Congress representing Minnesota, voting on what becomes the law of the land in the greatest nation on Earth and is even a sitting member on the House Foreign Affairs Committee.

More Trouble For Pelosi, Schiff, Others As Trump Calls For Investigation Into Whistleblower Misconduct – “Investigate”

Trump scare shows no American is immune from coronavirus risk

The White House insists President Donald Trump doesn’t need a coronavirus test, despite several members of his political circle self-quarantining after they came into contact with a man later diagnosed with the disease. They include Florida GOP Rep. Matt Gaetz, who rode in “The Beast” limousine with Trump in the Sunshine State on Monday, before […]

Xiaochen said she was 14 when she had her first cosmetic procedure — liposuction paid for by her mother to reduce fat from her thighs. At the time, she said she had been diagnosed with an autoimmune disease that required her to take glucocorticoids, a class of steroid hormones. “I had put on […]