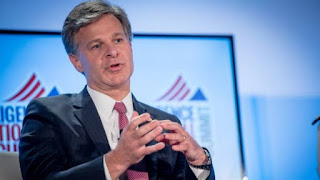 ….and the Democrat National Committee-The Democrat Party apparatus-has been caught using donor Dollars to Collude with Russian Intelligence to attack a domestic political opponent (me). The FBI has no leadership. The Director is protecting the same gang…..that tried to….

Seems president Trump was right after all as House GOP leadership is now convinced FBI Director Christopher Wray is not cooperating with Bill Barr and John Durham’s investigation into the origins of Spygate [as reported by investigative reporter Paul Sperry], who went on to say “GOP Reps believe Wray is part of the cover-up of Spygate after burying documents and refusing to make people available for interviews.”

BREAKING: House GOP leadership has soured on Comey replacement Wray. They r now convinced Wray’s not part of the FBI cleanup & not cooperating w AG Barr & is in fact part of the cover-up of #SpyGate scandal after burying documents & refusing to make people available for interview

Top Democratic Senator INDICTED Over 39 Count Of Embezzlement, Other Charges

GATEWAY PUNDIT – Illinois Democrat State Senator Tom Cullerton on Friday was indicted on federal embezzlement charges for allegedly defrauding a union. Cullerton, a Democrat, was accused of taking approximately $275,000 in salary and benefits from the Teamsters Union, but doing no work for the union. Federal prosecutors allege that Cullerton used the proceeds from […]