CRIMINAL REFERRAL OF STEELE REVEALS MISSING PORTION FROM STEELE DOSSIER "NOT MADE PUBLIC BY BUZZFEED" - TruthSeries
Skip to content
BuzzFeed published the 35-page dossier on Jan. 10, 2017, after CNN reported on its existence, as well as a preparation of a two-page synopsis used to brief President Barack Obama and
President-elect Trump. CNN also reported that the FBI was investigating the credibility of the information in the dossier.

A federal judge ruled in favor of BuzzFeed in a defamation lawsuit over its publication of the so-called “Steele dossier” in January, 2017, ruling that because the document was part of an official proceeding, the site was protected by fair reporting privilege.
U.S. District Judge Ursula Ungaro wrote that the “privilege exists to protect the media while they gather information needed for the public to exercise effective oversight of the government.”
New information coming in has it that a portion of the dossier dated 19th October, 2016 was not made public by Buzzfeed when it published the Steele dossier in January of 2017. But this portion is noted in Senator Lindsey Graham’s criminal referral letter to the DOJ regarding Steele. 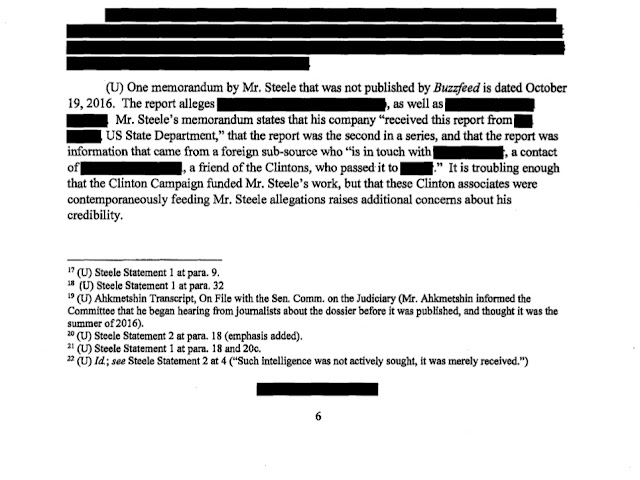 GATEWAY PUNDIT – The first FISA warrant was obtained in late October 2016.  This section of the dossier was provided to FBI from someone in the Obama State Department who is a close friend of the Clintons before the first warrant was issued by the FISA Court.
The Trump – Russia dossier is a scattering of bogus reports and data, with some pages and sections replaced and inserted, causing the whole production to be suspect (not withstanding the outrageous and bogus claims in the reports).

John Durham and Christopher Steele Christopher Steele, a former Russia expert for the British spy agency MI6 was hired in 2016 by Fusion GPS (paid by Hillary Clinton and the DNC) to compile a 35-page dossier smearing Donald Trump during the 2016 presidential campaign is refusing to cooperate with US Attorney John Durham in his […]

Bruce Ohr and Adam Schiff New bombshell report on the so-called anti-Trump dossier could have many top FBI and DOJ officials fired. According to John Solomon, then senior Justice Department official Bruce Ohr cautioned FBI and DOJ officials back in 2016 that the Steele dossier was connected to Clinton campaign and is likely biased and […]