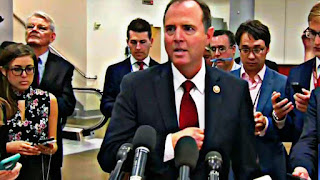 On Sunday, the House Intelligence Committee Chairman Adam Schiff appeared on NBC to discuss the ongoing investigation into the Russia Collusion Witch Hunt.

During the interview, NBC host Chuck Todd asked Adam Schiff if Mueller is making a mistake by not having President Trump testify under oath.

Crooked Schiff said “yes, I think it is a mistake, and I’ve said it all along that I don’t think Bob Mueller should rely on written answers,” Schiff continued. “When you get written answers from a witness it’s really the lawyer’s answers as much as the client’s answer.”(Trending; All Hell Broke Loose, Tyrant Adam Schiff CUTS Mic On GOP Rep. After Damning Opening Remarks In HEATED House Intel Hearing)

Adding that “mueller is under “time pressure” to conclude his work and that President Trump has made over 100 false statements to the public  already.” READ MORE

According to an article by POLITICO: Democratic criticism of the attorney general comes amid media reports that a department probe into the FBI’s investigation connections between Russia and the Trump 2016 campaign has now become a criminal investigation. Rep. Adam Schiff (D-Calif.), the chairman of the House Intelligence Committee, accused Barr on Sunday of “weaponizing” […]

Two staffers for Democratic Rep. Adam Schiff, chairman of the House Intelligence Committee have been discovered to have ties to the Atlantic Council, a think tank that receives funding from and works in partnership with Burisma Holdings, the Ukrainian natural gas company whose relationship with Hunter and Joe Biden forms the basis of the current […]