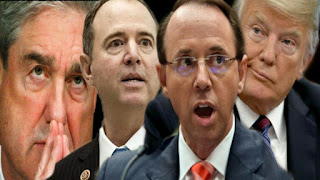 While addressing a cheering audience at the annual CPAC in Oxon Hill, Maryland, Trump trashed the events that led to the Russia investigation. Saying

“We had the greatest of all time. Now we have people that lost, and unfortunately you put the wrong people in a couple of positions, and they leave people for a long time that shouldn’t be there. And all of a sudden, they are trying to take you out with bullsh*t, okay? With bullsh*t.”

Trump, at @CPAC says “collusion delusion” is taking over America.

“And the next thing you know, they’re trying to take you out with bullshit.” pic.twitter.com/6g0qGDTXNs

MUELLER IN HOT WATERS OVER NEW HARASSMENT CLAIM THROWN AT HIM

$1.3 MILLION PAID BY SOROS TO FLOOD LAWSUITS AGAINST TRUMP EXPOSED

President Trump (left), George Soros (right) One interesting thing about “truth” is that it always finds a way of coming to the surface no matter how hard you try to conceal it. Despite every move by the Democratic party to pull President Trump down ranging from the Mueller probe, fight against border wall construction to […]

Robert Mueller (left), Jerome Corsi (right) The Democrats just don’t know when to stop pushing. First off, they wrongly accuse President Donald Trump of colluding with Russia during the 2016 presidential election and now, they wrongly accuse a conspiracy theorist, Jerome Corsi, a former employee of Inforwars of having contacts with then wikileaks president Julian […]