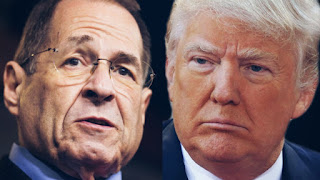 On Monday, House Judiciary Committee officially launched a probe into potential “obstruction of justice” by President Trump. 81 individuals and organizations associated with Donald Trump got document requests with a two weeks ultimatum to respond. In which failure to do so, could be hit by legally binding subpoenas.

This has been the most aggressive move made by Democrats, in the last three years of their every effort to go after Donald Trump. Not only is his business under scrutiny, but the democrats have taken on a new low to dissect the President’s Family.

Disgraced Former FBI Acting Director Andrew McCabe implied in his book; “The Threat: How the F.B.I. Protects America in the Age of Terror and Trump” that Special Counsel Robert Mueller illegally taped President Trump while in a closed door meeting at the Oval office. (Breaking; Petrified Nancy Pelosi Unknowingly SMEARS Her Self On Live TV..Watch […]

President Trump (left), James Mattis (right) In the light of Secretary of Defense James Mattis resignation, many liberals and liberal news networks including Nancy Pelosi, CNN, The Washington Post and others took to twitter to pour out their frustrations. Some went as far as demanding for President Trump’s impeachment while others gave threats of committing suicide. […]