Crooked Hillary Clinton FURIOUS As Bernie Sander DISSES Her, Drops The Shocker On Her Actions In 2020 Presidential Bid “I Think Not” (VIDEO) - TruthSeries
Skip to content 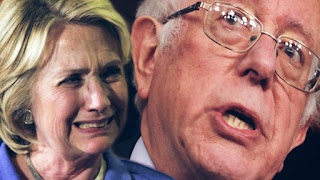 On friday, 2020 Presidential Candidate and Dem. Socialist Senator Bernie Sanders appeared on The View, and dropped the shocker on Hillary Clinton. Sanders made known that he doesn’t plan on seeking advice from Hillary Clinton because they have ‘fundamental differences.’

Sanders explained that while he respects Clinton, they don’t exactly agree on a variety of issues. Sanders also revealed his plans to unite the left in his 2020 campaign, something he failed to do in 2016.

“Hillary… she has not called me,”

When asked if he would ask Hillary Clinton for advice, Sen. @BernieSanders says “I think not”: “Hillary and I have fundamental differences.” https://t.co/f8u2wc159S pic.twitter.com/PPlh0sKr7D

Hillary Clinton and Tom Fitton Hillary Clinton’s Emails, many of which are Classified Information, got hacked by China. Next move better be by the FBI & DOJ or, after all of their other missteps (Comey, McCabe, Strzok, Page, Ohr, FISA, Dirty Dossier etc.), their credibility will be forever gone! — Donald J. Trump (@realDonaldTrump) August […]

HILLARY CLINTON ABOUT TO FACE TRIAL? MAJOR BENGHAZI LEAKS RESURFACES AND THREATENS TO PUT HILLARY’S FREEDOM ON THE LINE

Image credit: Google images Major Benghazi leaks resurfaces and threatens to put Hillary Clinton in limelight for all the bad reasons. Hillary Clinton wasonce United States “Secretary of state” and this was at the time when the Benghazi attack on September 11, 2012 was launched. Greg Hicks, former Deputy Chief of Mission for Libya launched […]

2 Replies to “Crooked Hillary Clinton FURIOUS As Bernie Sander DISSES Her, Drops The Shocker On Her Actions In 2020 Presidential Bid “I Think Not” (VIDEO)”