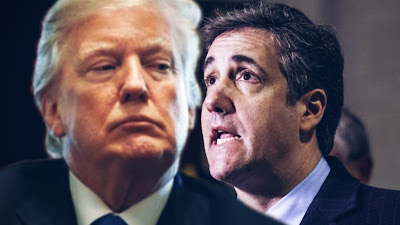 The world renown Pathological and convicted liar Michael Cohen has been caught in another lie, and this lie may shed more light on the series of lies he has told Congress, negatively impacting his jail time.

The disclosure by Lanny Davis, first reported by the Wall Street Journal, directly contradicts testimony by Cohen last week on Capitol Hill, in which Cohen told members of the House Oversight and Reform Committee: “I have never asked for, nor would I accept, a pardon from Mr. Trump.” In a written statement, Davis said Cohen “directed his attorney” to ask about a possible pardon.

The WSJ added that it previously reported that Stephen Ryan, a past attorney for Cohen, discussed a pardon with President Trump’s lawyers in the weeks after FBI agents raided Cohen’s home, office and hotel room. If these statements are true, then it means Cohen, once again lied under oath before a congressional committee. READ MORE

Nearly a week since Disgraced Ex-acting FBI Director Andrew McCabe revealed members of the Trump administration were ready to oust him from office, Adam Schiff, the U.S. Representative for California also said he was not ready to accept the results of special counsel Robertl Mueller’s investigation. (Related; The END, It’s A Trap, Trey Gowdy Just […]

On Wednesday, Michael Cohen the former personal attorney of President Trump told Congress that he and his team had made preparations with top Congressional Democrats before his testimony to the House Oversight and Reform Committee. “What did you talk to Mr. Schiff about?” Cohen: “I spoke to Mr. Schiff about topics that were going to […]

Image credit: politico.com, getty images Hillary Clinton who always thinks she could get away with any wrong doing just picked a fight with the wrong person. She was left running for cover right after she tried to bait trump in a tweet. Hillary Clinton in a tweet pours scorn on the Trump-Putin submit saying: “Great […]