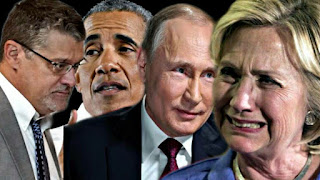 After two years of investigation into Trump-Russia Collusion both the House Intelligence Committee and Senate Intelligence Committee have turned up empty, with no evidence to tie the President to the Russians. But even though same cannot be said about the Clinton-Campaign and its ties to the Russians, the democrats have been relentless in making sure Hillary Clinton is kept out of the Russia-Collusion limelight. (Breaking; Petrified Nancy Pelosi Unknowingly SMEARS Her Self On Live TV..Watch (Video))

Regardless of the security risk, Hillary Clinton has been in bed with the Russians long before POTUS came into the picture. Clinton’s handprint have been all over Russia from the very beginning. From her effort

According to The Hill,
“The intersections between the Clintons, the Democrats and Russia carried into 2016, when a major political opposition research project designed to portray GOP rival Donald Trump as compromised by Moscow was launched by Clinton’s presidential campaign and brought to the FBI.” (Related: FBI Insider-Fusion GPS Payed Journalists To Dig Up Dirt On Trump)

With the bulk load of evidence connecting Hillary Clinton and her campaign to the Russians, displaying financial payoff’s of government officials and intelligence firms, it confirms real Collusion between her campaign and Russia unlike what years of wasted American resources into Russian Collusion investigation has proven in the case of President Trump.

In a bombshell report by the Hill,
Glenn Simpson’s Fusion GPS research firm was secretly hired by the Clinton campaign and Democratic Party through their law firm, Perkins Coie.


Simpson then hired retired British intelligence operative Christopher Steele — whom the FBI learned was “desperate” to defeat Trump — to write an unverified dossier suggesting that Trump’s campaign was colluding with Russia to hijack the election.

Simpson, Steele and Perkins Coie all walked Trump-Russia related allegations into the FBI the summer before the election, prompting agents who openly disliked Trump to launch a counterintelligence probe of the GOP nominee shortly before Election Day.

Simpson and Steele also went to the news media to air the allegations in what senior Justice Department official Bruce Ohr would later write was a “Hail Mary” effort to influence the election.

Congressional investigators have painstakingly pieced together evidence that shows the Clinton research project had extensive contact with Russians.

On February 14th, Republican Sen. Lindsey Graham, chairman of the Judiciary Committee demanded both Andrew McCabe and Rod Rosseinstein Appear before the committee at Capitol hill. This was in response to the explosive CBS interview with Andrew McCabe, which uncovered plans to potentially impeach the president. After Mr. McCabe’s 60 Minutes interview, it is imperative […]

Hillary Clinton and Barack Obama During the early hours of January 25th, the FBI carried out a raid on Roger Stone storming his home with seventeen vehicles including two armored tactical trucks and two dozen heavily armed federal agents to arrest him. All this for someone who was charged with lying to congress and yet […]

Hillary Clinton and Tom Fitton Hillary Clinton’s Emails, many of which are Classified Information, got hacked by China. Next move better be by the FBI & DOJ or, after all of their other missteps (Comey, McCabe, Strzok, Page, Ohr, FISA, Dirty Dossier etc.), their credibility will be forever gone! — Donald J. Trump (@realDonaldTrump) August […]