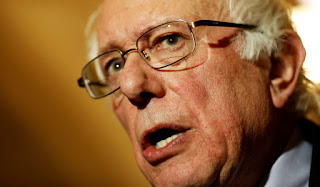 On tuesday, Sen. Bernie Sanders launched his campaign for the Democratic presidential nomination and in the process,  launched an all out attack on President Trump.

According to Vermont Public Radio reports, Sanders referring to the president, said,
“I think the current occupant of the White House is an embarrassment to our country.”

He also blasted Trump’s presidency, saying in an email to supporters,
“we are running against a president who is a pathological liar, a fraud, a racist, a sexist, a xenophobe and someone who is undermining American democracy as he leads us in an authoritarian direction.” (Breaking; Limbaugh IGNITES Deep State PANIC, Proves Mueller Investigation, A ‘COVER UP,’ Meant To ‘Distract Everybody’s Attention’)

Sander’s capitalizing on the current divide, blamed Trump, saying
“I’m running for president because, now more than ever, we need leadership that brings us together — not divides us up.


National Press Secretary Kayleigh McEnany posted President Trump’s campaign statement on Twitter, which says,
“Bernie Sanders has already won the debate in the Democrat primary, because every candidate is embracing his brand of socialism. But the American people will reject an agenda of sky-high tax rates, government-run health care and coddling dictators like those in Venezuela.
Adding that

Only President Trump will keep America free, prosperous and safe.

Bernie’s rage towards the president might just be more personal than politically driven, since he was often trolled and called ‘Crazy Bernie’ by the president after he took office

President Trump: “Bernie Sanders, Crazy Bernie. It’s amazing that he was even more angry that the election got stolen from me. I don’t get it. You know he’s always like complaining complaining is jumping around, the hair’s going crazy.” pic.twitter.com/PUKz900W6C

Senator Elizabeth Warren First it was democratic socialist princess Ocasio-Cortez who suffered a massive twitter meltdown after she was called on her elite up bring, then Hillary was trolled by conservative actor James Woods on twitter for slipping down steps in India. Now we have Sen. Elizabeth Warren who was mocked on twitter over her […]

Ex-Obama Aides Tell Biden to Beef Up David Axelrod and David Plouffe argue in the New York Times that Joe Biden needs to improve his digital operation and move on from relying solely on scripted speeches from his basement. They write: “Mr. Biden can turn the tables on Mr. Trump. To do this, the challenger needs […]

4 Replies to “Right After Declaring 2020 Bid, Trolled Bernie HIT With Worst News In His Career”