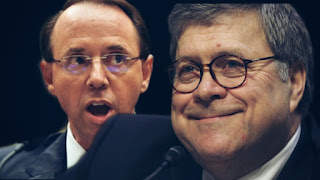 Deputy Attorney General Rod Rosenstein plans to leave the Justice Department in mid-March. Although sources say Rosenstein’s departure is not related to a controversy surrounding his alleged offer to wear a wire, he faces possible Indictment from his Republican counterparts. (Related; Petrified Nancy Pelosi Unknowingly SMEARS Her Self On Live TV..Watch (Video))

After Mr. McCabe’s 60 Minutes interview, it is imperative that he, and others, come before @senjudiciary to fully explain how and why a FISA warrant was issued against Carter Page and answer questions about what appears to be, now more than ever, bias against President Trump.

Jeffrey Rosen is a distinguished lawyer who has served at the highest levels of government and the private sector. Adding that his years of outstanding legal and management experience make him an excellent choice to succeed Deputy Attorney General Rod Rosenstein.

Both Rosenstein and McCabe have previously come under fire by president.

Wow, so many lies by now disgraced acting FBI Director Andrew McCabe. He tweeted. He was fired for lying, and now his story gets even more derange. He and Rod Rosenstein, who was hired by Jeff Sessions (another beauty), look like they were planning a very illegal act, and got caught.

The new AG Will Barr now has full control over the Special counsel Robert Mueller’s investigation. The investigation which Rod Rosenstein began overseeing after former Attorney General Jeff Sessions recused himself of it.

Christopher Wray and Rod Rosenstein This is one illegal act Deputy Attorney general Rod Rosenstein and FBI Director Christopher Wray will not be walking free from with new details emerging of how they both lied Trump and Congress claiming that no investigation is being carried out on the president. From The Gateway Pundit: “in April […]

John Huber and William Barr Huber’s long-running inquiry into FISA application has long been shrouded in mystery and as such, Attorney General William Barr appointed Durham to take over most of his responsibilities. According to Barr, “Huber had originally been asked to take a look at the FISA applications and the electronic surveillance” but that […]