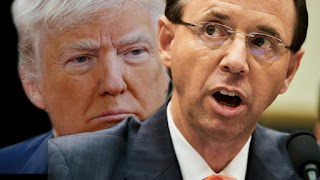 On saturday, a Former top FBI counsel James Baker said in a closed door testimony with congress that at least two members of President Trump’s cabinet were ready to kick him out of the oval office.

Even though he didn’t have the names, he did say both Lisa Page and Andrew McCabe informed him of the situation, adding that Rod Rosseinstein was the ring leader in charge of the intended coup. (Breaking; Petrified Nancy Pelosi Unknowingly SMEARS Her Self On Live TV..Watch (Video))

I was being told by some combination of Andy McCabe and Lisa Page, that, in a conversation with the Deputy Attorney General, he had stated that he had at least two members of the president’s Cabinet who were ready to support, I guess you would call it, an action under the 25th Amendment,” Baker told the committees.

A Fox report, said the testimony, which took place within a two days period sometime Last fall, had to do with the intended use of the 25th Amendment. That which “provides a mechanism for removing a sitting president from office, if a majority of the president’s Cabinet says the president is incapable of discharging his duties.”

Adding to it a copy of bakers interview with the committee

Question: “Do you know what direction that went? Was it Mr. Rosenstein seeking out members of the Cabinet looking to pursue this 25th Amendment approach or was it the other way around?”

Baker: “What I recall being said was that the Deputy Attorney General had two members of the Cabinet. So he – how they came to be had, I don’t know, but…”

Question: “So he had two members, almost like he was taking the initiative and getting the members?”

Baker: “That would be speculation on my part.”

Baker also said he did not know the names of the two Cabinet officials.

“Lisa and Andy did not tell me, and my impression was they didn’t know themselves,” he said.

Even though McCabe interview completely oust Rod Rosseinstein as the ring leader of these treasonous act, the DOJ have been relentless in denying the allegations, calling it “inaccurate and factually incorrect.” while claiming that the anonymous sources behind the story were  obviously biased.

McCabe, who recently was hired as a paid CNN commentator, spent 21 years with the FBI. He became the acting director in May 2017 after President Trump fired former director James Comey. Last month, a source told Fox News that McCabe had a “target on his back” because of the Justice Department inspector general findings. US Attorney Jessie […]