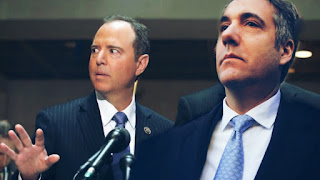 On Wednesday, Michael Cohen the former personal attorney of President Trump told Congress that he and his team had made preparations with top Congressional Democrats before his testimony to the House Oversight and Reform Committee.

“What did you talk to Mr. Schiff about?”

Cohen: “I spoke to Mr. Schiff about topics that were going to be raised at the upcoming hearing.”

“Woah. Not just what time to show up? Actually what you’re going to talk about?” pic.twitter.com/c07dRqbQ8A

Bill Clinton (left), Loretta Lynch (right) Seems the fight against corrupt democrats is finally gaining some momentum and hopefully, we will be seeing positive results at the end of it all. First, it was former FBI Director James Comey who was subpoenaed and questioned twice by GOP lawmakers in Capitol Hill. Now we have former […]