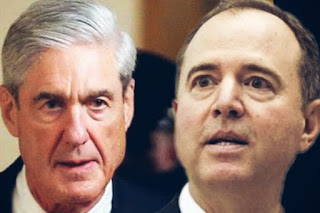 Nearly a week since Disgraced Ex-acting FBI Director Andrew McCabe revealed members of the Trump administration were ready to oust him from office, Adam Schiff, the U.S. Representative for California also said he was not ready to accept the results of special counsel Robertl Mueller’s investigation. (Related; The END, It’s A Trap, Trey Gowdy Just REVEALED The BOMBSHELL Adam Schiff Was Hiding BEHIND)
Unless of course it provides evidence of Trump-Russian Collusion.

We expect at some point maybe soon, maybe not, the findings of the Mueller investigation to finally be completed. If he finds that there was no direct collusion between the Trump campaign and Russia, will you accept that?

Schiff responded, promptly
“We’re going to have to do our own investigation, and we are. “We’ll certainly be very interested to learn what Bob Mueller finds. We may have to fight to get that information.” Adding that
“Bill Barr has not been willing to commit to provide that report either to the Congress or to the American people. We’re going to need to see it. The American people need to see it. We may also need to see the evidence behind that report. There may be, for example, evidence of collusion or conspiracy that is clear and convincing but not proof beyond a reasonable doubt.”


Right after Acting Attorney General Matthew Whitaker told reporters Mueller’s investigation is,
“I think, close to being completed and I hope that we can get the report from Mueller as soon as possible,”
Democrats have been on edge, impatiently waiting for the results of the investigation.

Adam Schiff who claimed he had evidence of collusion since 2017 but couldn’t provide any, decided to provide the special counsel with every piece of information they had on the Russian Collusion. All in an effort to take down the President, no longer have faith in the Mueller’s investigation. Claiming they might have “evidence” of Collusion not prove beyond reasonable doubt.

When CNN’s Host Dana Bash further pressed Adam Schiff, asking “if the Congressman would accept the findings “separate” from the investigation the Congressman is doing?”
he replied. “You know, I will certainly accept them in this way, Dana; I have great confidence in the special counsel. And if the special counsel represents that he has investigated and not been interfered with and not been able to make a criminal case, then I will believe that he is operating in good faith.”

Nancy Pelosi left, President trump right Democrats tried everything possible, worked tirelessly to make sure they gained control during the midterms but i guess there wasn’t much luck on their side. Well, they did manage to win back the seats in the House and this had Nancy Pelosi bragging and now she got herself caught […]

President Donald Trump just shocked every democrat most especially former Democratic Presidential candidate Hillary Clinton and former President Barack Obama with what he just made public and believe me when i say this is worse than a nightmare for them. This is just “wow’, there is no way the democrats are going to recover from […]