Skip to content
We all know the Democratic party is hell bent on turning Trump’s focus away from Making America Great Again. But out of every accusations they have against the president, this is by far the craziest which is coming from no other person than Adam Schiff.

From Conservative Fighters: “Democratic Rep. Adam Schiff (D-CA) who is set to take over the House Intelligence Committee when Democrats reclaim the House of Representative in January, told Face the Nation that he believes President Donald Trump faces ‘prospect’ of ‘real jail time’ after prosecutors accuse the president of directing his Former Attorney, Micheal Cohen, to issue payments to two of the president’s mistresses.”
According to Face the Nation on twitter “@AdamSchiff on the Russia investiagetion: My takeaway is there’s a real prospect that on the day Donald Trump leaves office, the Justice Department may indict him. That he may be the first president in quite some time to face the real prospect of jail time.” 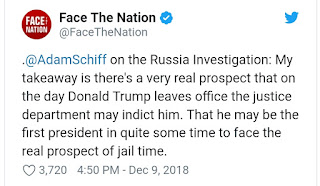 The allegation if true, appear to be campaign finance violations. Schiff even went as far as saying Democrats are considering how to prevent future presidents from pardoning Trump knowing fully well the accusation is not official.

admin
My love for politics is unusual because I don't love it for the same reasons a lot of people do. I love politics because it challenges me. For me, being involved in politics isn't about having an opinion about every issue. It is about learning both sides of each issue and being fascinated by them. There are very few political issues that I have strong opinions on. The rest I either have yet to educate myself on or I understand both sides and have yet to choose which one I agree with.

Disgraced Former FBI Acting Director Andrew McCabe implied in his book; “The Threat: How the F.B.I. Protects America in the Age of Terror and Trump” that Special Counsel Robert Mueller illegally taped President Trump while in a closed door meeting at the Oval office. (Breaking; Petrified Nancy Pelosi Unknowingly SMEARS Her Self On Live TV..Watch […]

The White House released a memo that included a transcript of the call between Donald Trump and Ukraine’s President Volodymyr Zelensky that is now the focus of an impeachment inquiry. In the call on July 25, Trump congratulates Zelensky for his victory in the elections, the two exchange pleasantrie, Donald Trump talked about a cybersecurity firm in […]

Trump Teams Up With Trey Gowdy To Battle Pelosi, Schiff On Impeachment Inquiry

During a July phone call, Trump asked Ukrainian president Volodymyr Zelensky to launch a corruption probe into a political rival, Joe Biden, and his son Hunter Biden, though there is no known evidence that the pair did anything wrong. But Democrats are using this call a means to carry out a coup against Trump. Now, former GOP […]