TRUMP CALLS FOR IMPRISONMENT OF DEPUTY A.G. ROSENSTEIN, OBAMA, OTHERS - TruthSeries
Skip to content
This came as a shock to all democrats and left minded Americans as President Donald Trump went on tweeter promoting what should have been done a long time ago. President Trump on Wednesday morning in a re-tweet, promoted calls for the imprisonment of Deputy Attorney General Rod Rosenstein and other prominent
Democratic leaders and law enforcement officials.

Funny as it may seem, this is something most Americans have been waiting for to happen for some time now. The quote on the meme reads “NOW THAT RUSSIA COLLUSION IS A PROVEN LIE, WHEN DO THE TRIALS FOR TREASON BEGIN?”
Prominent democrats such as Former president Barack Obama, Former president Bill Clinton, Huma Abedin, John Podesta, Hillary Clinton, fired FBI Director James Comey, Deputy AG Rod Rosenstein, Eric Holder, James Clapper and Loretta Lynch. 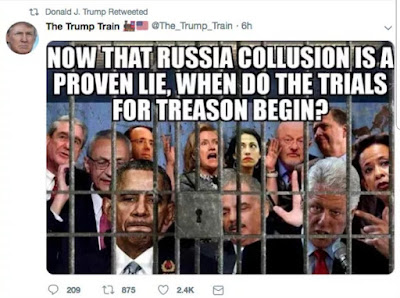 To make things even more interesting, every name listed above and every face you see in d meme above is without doubt guilty of one crime or the other against the United States of America.
Feel free to express your thoughts about President Trump’s meme re-tweet in the comment section below.

For more than a year and a half, Inspector General Michael Horowitz has been investigating alleged misconduct related to the FISA warrants delivered by the Foreign Intelligence Surveillance Court (FISC). The Justice Department and FBI obtained warrants in 2016 to surveil Trump adviser Carter Page. It is unclear, at this point, if Page was the […]

Rep. Jim Jordan (left), Rep. Sherman (right) Its now clear that Nancy Pelosi and her gang are more focused on impeaching President Trump rather than working together with him to Make America Great Again. “Democrats can’t just help themselves”, Rep. Jim Jordan said in a tweet. Rep Sherman files article of impeachment on President Trump […]

Hillary Clinton left, Chuck Grassley right Seems the Clinton’s trick just failed them massively this time around on their attempt to silence a whistle-blower and this time with the help of the FBI. Now, top Republican congressmen are making a move on this as they refuse to sit back and let it pass. Though it […]