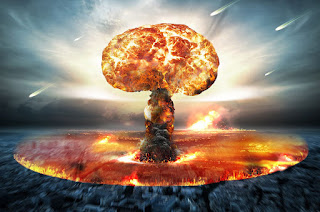 The World is preparing for what could be the most devastating world war after the world war 2; what you may call a nuclear Holocaust.

This is coming after the recent threats poised by the stubborn North Korean leader, Kim Jun Un, who has repeatedly defied the US and the UN orders to stops missile tests.
During his separate phone talks with American and Japanese leaders Monday, President Moon Jae-in agreed to impose
a ''maximum level of pressure and sanctions'' to induce change in North Korea's behavior. While talking with President Donald Trump, in particular, Moon stressed that the North ''must be brought to the point where it can no longer withstand sweeping sanctions.''
It's encouraging that the three countries reaffirmed their strong coordination against Pyongyang's nuclear and missile threats. Efforts to induce the rogue state to abandon its nuclear ambitions through stepped-up sanctions are surely going in the right direction.Given the North's fierce protests of the latest United Nations Security Council resolution, the likelihood is that the recalcitrant regime in Pyongyang won't back off from its nuclear brinkmanship in the foreseeable future. So the maximum level of pressure and sanctions are essential, considering that North Korea won't forsake its nuclear and missile programs until it finds it impossible to survive without ditching them.During his nearly one-hour conversation with Trump, Moon said there should be no outbreak of war on the Korean Peninsula, noting the need to resolve the North Korean nuclear issue in a peaceful and diplomatic manner. Moon's perceptions are quite natural, taking into consideration that there have been allegations of preemptive strikes on the North in the United States amid an escalation of its nuclear and missile provocations.But it would not be wise if South Korea alone stuck to dialogue with the North at a time when sanctions have already become the norm around the world. This will certainly benefit only North Korea and China, its last remaining ally, as the hard-won international coordination of sanctions against Pyongyang falters once again.What is certain is that now is the time for pressure rather than dialogue. The United States and North Korea have been engaging in tense psychological warfare, confronting each other. Against this backdrop, it's obvious that our single-handed call for dialogue with Pyongyang could result in us isolating ourselves internationally down the road.Certainly it's time to drop vague expectations for peace and make all-out efforts to pressure North Korea into negotiations through increased coordination with Washington.