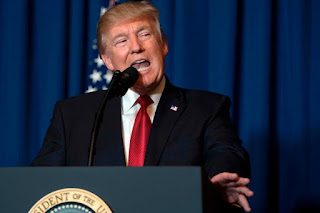 The left will do just anything to get President Trump off the White House; the most recent being what these crazy psychotherapists call "mental illness".
The group "Duty to Warn," founded by influential psychotherapist Dr. John Gartner, has gathered nearly 60,000 signatures from
mental health professionals on a petition calling for the removal of Donald Trump from office due to "serious mental illness that renders him psychologically incapable of competently discharging the duties of President of the United States." The group hopes to reach its goal of 75,000 signatures before planned multi-city town hall meetings on October 14.

The petition takes place in the context of mental health organizations struggling to clarify their positions on the ethics of their members publicly commenting on the mental health of public officials.
Historically, the "Goldwater Rule," as it became known, refers to a rule from the American Psychiatric Association's Principles of Medical Ethics forbidding its members to comment on the mental health of public figures. Recently, the American Psychoanalytic Association issued a statement saying that its members should feel free to comment on public figures' mental health, but should refrain from offering official diagnosis. A news article misreported this statement as originating from the American Psychiatric Association (from which the Goldwater Rule originated), prompting the organization to issue a statement titled "APA Reaffirms Support for Goldwater Rule".
This in turn led  to a statement from American Psychological Association President, Susan H. McDaniel, in which she wrote, "our ethical code states that psychologists should not offer a diagnosis in the media of a living public figure they have not examined."
Against this background of many organizations, all with the acronym "APA," drawing different lines for their members' ability to "comment on" and/or "diagnose" public figures, these same organizations have versions of rules allowing members to disclose confidential patient information when withholding this information would put people at risk. For example, the American Psychological Association Ethical Standard 4.05 writes that "Psychologists disclose confidential information without the consent of the individual only as mandated by law, or where permitted by law for a valid purpose such as to... protect the client/patient, psychologist, or others from harm."
This is a psychologist's duty to warn—most will have heard of this rule in the context of mandatory reporting of child abuse. Now the organization Duty to Warn applies this same logic to commenting on the mental health of Donald Trump, with its Facebook page writing that "Donald Trump is too seriously mentally ill to competently discharge his duties as president and must be removed according to the 25th Amendment." The group and its petition have reached the public ear in such spaces as the Daily Kos, USA Today, New York Magazine, Salon.com, and many more.
Now the group is making a push for signatures before multi-city town hall events, scheduled for October 14, 2017 in Atlanta, Chapel Hill, Charlotte, Chattanooga, Chicago, D.C., Los Angeles, New York, Phoenix, and San Francisco (with additional cities possibly added).
Just how much  longer will it take for the Democrats to accept that Hillary Clinton lost?
at August 08, 2017