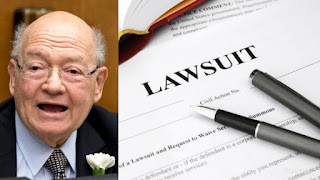 A man identified in court records as “John Doe” alleges in a new lawsuit that former New York Rep. Gary Ackerman sexually abused him when he was a teenager.

The plaintiff says Ackerman exploited him in 1966 when the former Democratic congressman was a director at Ten Mile River Scout Camp. The victim, who was 17 at the time, claims Ackerman coerced him into taking a drive and brought him to a secluded back road, where he tried to fondle the boy before forcing oral sex on him. The suit says Ackerman was a ‘known predator’ and that the Boy Scouts ‘should have known’ he posed a danger to children.
Ackerman’s attorney, Oscar Michelen of Cuomo LLC, stridently denied the allegations in a statement to the AP and said they would “vigorously” seek to have the suit dismissed.  “In over 30 years of public service, there has never been any accusation of this kind or indeed of any wrongdoing in the Congressman’s career,” Michelen said. The Boy Scouts also denies negligence in hiring Ackerman. “Had the national organization been made aware of credible allegations against Mr. Ackerman, we would have acted to remove him from scouting,” the organization said in a statement to the AP.

An autopsy found that financier Jeffrey Epstein sustained multiple breaks in his neck bones, according to two people familiar with the findings, deepening the mystery about the circumstances around his death. Among the bones broken in Epstein’s neck was the hyoid bone. According to Dr. Mark Siegel, “It certainly increased the chances that this was […]

Alfredo Rodriguez, the former butler of disgraced billionaire Jeffrey Epstein was found dead before taking a plea deal that involved giving up a black box, containing all of Epstein’s sexual dealings with hundreds of underaged girls and his fleet of billionaire clients. Apparently, Epstein was also found dead, after the court un-sealed over 2,000 previously […]