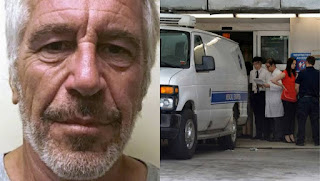 Epstein, accused of sexually assaulting and trafficking girls as young as 14, was found dead Saturday morning after he hanged himself in his cell at the Metropolitan Correctional Center.

The New York City medical examiner announced Sunday night that she has finished her autopsy of pedophile Jeffrey Epstein but the cause of his death “is pending further information,” a determination that is not uncommon. Chief Medical Examiner Barbara Sampson also noted that Epstein’s representatives have hired celebrity pathologist Michael Baden to conduct an independent autopsy and they were allowed to observe the autopsy.
Chief Medical Examiner Dr. Barbara Sampson said in a statement – “Today, a medical examiner performed the autopsy of Jeffrey Epstein. The ME’s determination is pending further information at this time. At the request of those representing the decedent, and with the awareness of the federal prosecutor, I allowed a private pathologist (Dr. Michael Baden) to observe the autopsy examination. This is routine practice. My office defers to the involved law enforcement agencies regarding other investigations around this death. Inquiries regarding the determination of the Chief Medical Examiner should be directed towards my office.”
According to Attorney General William Barr – “I was appalled to learn that Jeffrey Epstein was found dead early this morning from an apparent suicide while in federal custody. Mr. Epstein’s death raises serious questions that must be answered. In addition to the FBI’s investigation, I have consulted with the Inspector General who is opening an investigation into the circumstances of Mr. Epstein’s death.”

Why Trump Changed Tack on the Pandemic

reports that President Trump only shifted his tone as the coronavirus virus spread to “Trump country.” Said one former White House official: “The polling sucked. The campaign panicked about the numbers in red states. They don’t expect to win states that are getting blown to pieces with coronavirus.” “From the beginning of the crisis, Trump […]

Attorney General William Barr has ordered the immediate removal of acting US prisons director, this massive decision came after Epstein, a 66-year-old financier, was found dead in his Manhattan jail cell earlier this month as he awaited trial on charges of sex trafficking of minors and sex trafficking conspiracy. In a statement Monday, the attorney […]