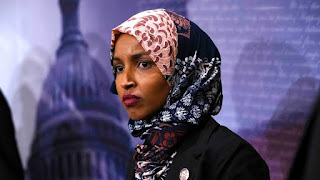 Alabama’s Republican Party is urging the state’s congressional delegation to begin the process of expelling freshman Rep. Ilhan Omar (D-Minn.) from Congress. The state GOP supported a resolution calling for the congresswoman’s ouster at its summer meeting in Auburn this past weekend, according to Al.com. The committee reportedly approved the resolution on a voice vote after it was introduced by state Rep. Tommy Hanes.

The resolution backed by Alaba
ma Republicans condemns Omar for what it calls her “disturbing record of using anti-Semitic language that includes alleging Jewish money is used to buy American influence regarding its policy toward Israel.” The state Republicans also voiced opposition to Omar’s public support of the boycott, divestment and sanctions (BDS) movement that presses Israel on human rights issues in its conflict with the Palestinians and accused the congresswoman of engaging in “rhetoric that explicitly runs counter to American values and patriotism.” The resolution alleges Omar “dismissed” the Sept. 11 terrorist attacks and “sympathized with a convicted terrorist” by pushing for “sentencing leniency.” Read more

On the 18th anniversary of 9/11, freshman Muslim Congresswoman and member of the HAMAS Caucus Rep. Rashida Tlaib (D-MI), was served with a lawsuit for allegedly assaulting Laura Loomer, who is Jewish, this happened in Minnesota when Loomer was covering a joint campaign event for then-candidates Ilhan Omar (D-MN) and Rashida Tlaib (D-MI). Laura Loomer […]

According to Mohammad Tawhidi of The Times Of Isreal, “Rep. Ilhan Omar has publicly declared her support for a notorious organization known for its terrorist leadership and financing of terrorism. But it almost went unnoticed, until the tweet was brought to my attention.” On the 26th of August, Rep. Ilhan Omar made the following tweet. Somali […]

New York Post – A Washington, DC, mom says her political-consultant husband left her for Rep. Ilhan Omar, according to a bombshell divorce filing obtained by The Post.Dr. Beth Mynett says her cheating spouse, Tim Mynett, told her in April that he was having an affair with the Somali-born US representative — and that he […]