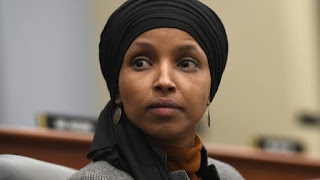 When the marriage and Immigration fraud allegations were brought against Ilhan Omar in 2016, all social media accounts belonging to Elmi were deleted and omar deleted all photos of Elmi on her Instagram account including the photo of her “next Elmi” in London from 2015.

Despite claiming that she has had no contact with Elmi since 2011, social media posts Proves that Omar and Elmi communicated long after that. Elmi is said to be a male relative to Omar possibly her brother and whom she got married to in 2009 and later divorced in 2017.


In 2016, as Omar was seeking a state House seat, AlphaNewsMN posted a screenshot of an Instagram post — since deleted — that was allegedly uploaded by Elmi on June 12, 2012, shortly after Omar gave birth to her third child. The caption of the photograph identified Elmi as holding the baby girl, calling her “nieces.” To some, this suggested a sibling relationship.

New Jersey Sen. Cory Booker endorsed Joe Biden for president on Monday, the latest high-profile supporter to back the former vice president. “The answer to hatred & division is to reignite our spirit of common purpose. @JoeBiden won’t only win – he’ll show there’s more that unites us than divides us,” Booker tweeted. “He’ll restore […]

Pressure mounts for Trump to actually use Defense Production Act

President Donald Trump has repeatedly said he’s invoking the Defense Production Act to ramp up production, but he hasn’t wielded his federal powers yet as health officials voice alarm about potential shortages of lifesaving medical supplies like ventilators and protective gear for doctors on the front lines of the coronavirus pandemic. Trump signed the measure […]

Rand Paul says he ‘probably will’ disclose whistleblower’s name. According to a report from The Hill: Sen. Rand Paul (R-Ky.) said on Tuesday that he might disclose the name of a whistleblower whose complaint about President Trump’s actions toward Ukraine spurred the House impeachment inquiry. Asked why he hasn’t disclosed the name of the unknown individual, Paul told reporters that […]