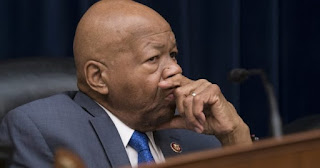 As congressman Elijah Cummings escalates his feud with President Trump, a watchdog group files an IRS complaint against his wife for public corruption. The watchdog alleges her group “received $6.2 million in grants from various corporate backers including Google, JP Morgan, Prudential & Johnson and Johnson.”
The congressman, 68, became chairman of the House Committee on Oversight and Reform this year. He has served in the House since 1996 and previously spent 14 years in the Maryland legislature. Rockeymoore Cummings, 48, is well known in Maryland political circles and launched a short-lived campaign for governor in 2017. She was elected party chair the following year. The couple have been married since 2008.

State Rep. Steve Drazkowski (R-MN-21B) issued a call for an ethics investigation of U.S. Rep. Ilhan Omar. Drazkowski, from Mazeppa, issued the challenge to U.S. Rep. Angie Craig (D-MN-02) during a press conference when he called for the withdrawal of Omar’s security clearance and for her removal from the House Committee on Foreign Affairs. This […]

Rand Paul says he ‘probably will’ disclose whistleblower’s name. According to a report from The Hill: Sen. Rand Paul (R-Ky.) said on Tuesday that he might disclose the name of a whistleblower whose complaint about President Trump’s actions toward Ukraine spurred the House impeachment inquiry. Asked why he hasn’t disclosed the name of the unknown individual, Paul told reporters that […]

20 Subpoenaed Over Epstein’s Death, And More Subpoenas About To Be Rolled Out

Gateway Pundit – The feds subpoenaed at least 20 officers at the Metropolitan Correctional Center in Manhattan where Jeffrey Epstein was found hanging in his prison cell of a ‘suicide.’ The correctional officers received the grand jury subpoenas as part of the DOJ’s investigation into the breakdown of prison policy at the MCC that led […]