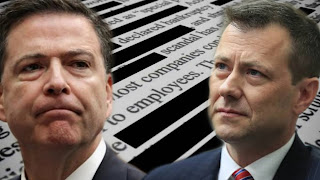 “The feds should let Maria Butina out of jail and put James Comey and Peter Strzok in her cell. If you watch anything today, watch this video,” the Kentucky Republican tweeted Friday, linking a video to a Fox News interview with Byrne. Byrne, 57, claimed over the past few weeks that the FBI encouraged him to carry on a sexual relationship with Maria Butina, a Russian spy. The former CEO said FBI officials involved him in “political espionage” and a “deep state” investigation. He named Strzok and former FBI Deputy Director Andrew McCabe as being involved along with officials at the top of the FBI.

Hillary Clinton left, James Comey rightImage credit: vox.com, premiumtimesng.com In a new bombshell revelation, it was discovered that James Comey lied about having reviewed  all of Hillary Clinton’s emails. Out of hundreds of thousands of emails found on Anthony Weiner’s laptop, only 3,000 emails were individually examined for classified information and incriminating evidence. The most […]

Comey In Legal Trouble As DOJ Announces Arrest Of Leaker

According to a report from the Justice Department inspector general, it is beyond any doubt that James Comey leaked sensitive law enforcement material in the Trump-Russia investigation. Doing so set a “dangerous example” for the bureau’s other employees. On Wednesday, the Justice Department announced the arrest of one leaker. 30 year old Henry Kyle Frese, […]