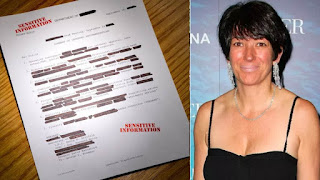 With Epstein gone, potential co-conspirators involved in his alleged sex-trafficking network are shifting into focus. British socialite Ghislaine Maxwell is one of four women accused of recruiting underage girls for sex. Maxwell is said to be Epstein’s ex-girlfriend turned business associate. Her current location is unknown.

As CBS News correspondent Holly Williams reports, documents unsealed on Friday contain allegations that Maxwell, a close acquaintance of Epstein’s, played an “important role” in the late billionaire financier’s “sexual abuse ring,” directing an underage girl to have sex with Epstein and others. “There are multiple victims who claim that Ghislaine Maxwell was a personal participant in recruiting them for Jeffrey Epstein, that she assisted in the scheduling of appointments, multiple victims being delivered to Epstein on a daily basis over an extended period of time,” attorney Jack Scarola, who has represented several of Epstein’s alleged victims, told CBS News.
Maxwell has been described as Epstein’s ex-girlfriend and assistant – his “best friend,” according to Epstein, and a socialite who helped connect him with the wealthy and famous. Another famous Brit caught up in this scandal is Prince Andrew, one of Queen Elizabeth II’s sons. Previously Unsealed documents repeat allegations that Maxwell trafficked Giuffre to Prince Andrew — though that claim was previously dismissed by a judge in the U.S. and struck from the record.

Elizabeth Warren Dragged Out Over Endorsement Of Illegal Immigrants.

Elizabeth Warren has endorsed the most insane immigration idea ever in the history of the United States aimed at making it “no longer a federal crime” to cross the border and migrate to the US without papers. Warren even went a little further in saying she’d also support getting rid of the companion law that […]