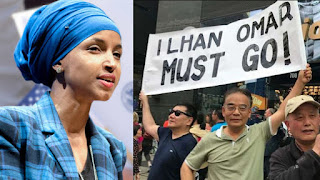 An Evangelical leader Laurie Cardoza-Moore has called on the Department of Homeland Security to put the freshmen Congresswoman Ilhan Omar and compatriot Rashida Tlaib on the no-fly list until they publicly denounce and condemn Hamas terror.

Seems the Controversial Congresswoman cannot stay away from controversy and now her public support for Hamas has brought her up for alot of criticism. “Omar and Tlaib have fundraised for Hamas-affiliates, there is no reason to believe that they don’t share the same ideology, they are a threat to Israel and America’s security.
Laurie Cardoza-Moore’s statement to place Omar and Tlaib on the “NO-FLIGHT” list came as Israel arose to the news that an innocent teenager was brutally stabbed to death and his body dumped on the side of a road in Gush Etzion after a possible abduction attempt. Hamas praised the attack as “heroic”. It also comes just days before the congresswomen’s plans to visit the Jewish State. They shouldn’t be able to board a plane to anywhere, especially Israel, unless they publicly condemn today’s murder of an innocent Israeli teenager, which was praised by their friends in Hamas,” said Cardoza-Moore. “Americans should be outraged that we have potential Hamas operatives in our our legislature. Today they won’t denounce the murder of innocents in Israel, tomorrow they may turn their focus on America” Cardoza-Moore added. She went on to say “There can be no justification for this type of bloodthirsty murder, just minutes away from Bethlehem. Tens of thousands of American patriots have signed and continue to sign our petition to oust these anti-Semites from congress, we now call upon the Department of Homeland Security to put Ilhan Omar and Rashida Tlaib on the no-fly list, if they don’t condemn Hamas terror.”

Coronavirus rages as Washington struggles to catch up

Despite declaring war on the coronavirus, a White House playing catch-up and a deadlocked Congress are struggling to cope with the pandemic’s tragic humanitarian and grave economic toll. A failed Senate vote on a mammoth stimulus bill amid acrimony between Republicans and Democrats came as the virus trimmed the GOP majority with five members quarantined. […]

A restless Trump wants to end the country’s isolation

He’s sitting through glitchy conference calls, and friends say he’s thinking about his job security. Cabin fever amid the coronavirus pandemic has set in and tensions on the team are brewing. No one quite knows when it will end. As Americans enter another week of self-isolation, President Donald Trump is enduring the same Covid-era hazards […]

just months into his presidency, a small circle of senior White House advisers met with Donald Trump about a carefully curated list containing the names of dozens of perceived political opponents, particularly leakers, working inside the government. A detailed account of the meeting was revealed for the first time to CNN by two former senior […]