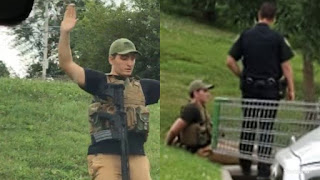 An Off-duty firefighter may have saved the life of countless people after stopping and arresting a 20 year old man with a rifle, handgun and body armor outside a Missouri Walmart on Thursday.

According to Springfield Police Department, “At approximately 4:10 p.m. Springfield Police Officers were dispatched to 3150 W. Republic Rd. to a Walmart Neighborhood Market.  An armed white male in his twenties was detained by an armed off-duty fireman until officers arrived on scene and took the suspect into custody. No injuries were reported and no shots were fired. At this time, the investigation is on-going and we are working to determine his motives. Any person that was present during this incident and did not speak to a police officer, please contact the Springfield Police Department to file a report and provide further information at (417) 864-1810.”

Bradley Cooper, a citizen journalist who shared exclusive photos of the armend “gun-man” with Gateway Pundit said “Tonight, in my hometown, an armed man was arrested wearing a bulletproof vest outside of a Walmart. IT IS TIME FOR ACTION. Not banning guns, not passing red flag laws, but working on MENTAL HEALTH. Something must be done. He further stated that ” The armed man with a bulletproof vest was reportedly stopped and held at gunpoint by a firefighter until police arrived. Yet all the news will be fixated about is the shooter, and not the firefighter. The narrative MUST change.”

Seems the battle is not over just yet for Hillary Clinton as things are about to get scarier for her in the coming days. Conservative watchdog group Judicial Watch is working tirelessly to ensure she faces justice. Judicial Watch announced earlier that a federal court ordered a hearing for Thursday, August 22, 2019, on the Clinton email […]

The audio contains an exchange between Dem. House Majority Whip Jim Clyburn, the third-highest ranked Democrat in the House, and a CNN host. The CNN host asked Clyburn if he agreed with the president that there was a “humanitarian crisis” at the border. Finding it funny, Clyburn chuckled and laughed before saying “absolutely not.” Although […]

It may be time for ‘Old Elijah Cummings’ to resign after all. More than 20years in service to the people of ‘Baltimore’ and nothing to show for it, Newly surfaced video expose Elijah Cummings. Put an end to the “Corruption”. The Trump campaign uncovered video Wednesday of Maryland Democratic Rep. Elijah Cummings calling his district […]