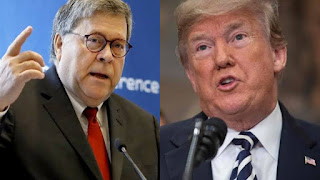 During a phone call interview on fox news, President trump revealed to Sean Hannity that he has given Attorney General William Barr the green light to release Declassified Spygate Documents.

Gateway Pundit – Trump praised Bill Barr and said he has given him all of the documents he needs to investigate the origins of Spygate. The president revealed that he also gave Barr the authority to release the declassified Spygate documents to whoever else needs them, including Rep. Devin Nunes, the ranking member of the House Intelligence Committee.

A new Bombshell Revelation published by Powerline blog on Thursday alleges Rep. Ilhan Omar not only married her brother to curtail U.S. immigration law, but received asylum from Somali as a child after her family used a false name.In other words, Rep. Ilhan Omar entered the country fraudulently in 1995 as a member of the […]

State Rep. Steve Drazkowski (R-MN-21B) issued a call for an ethics investigation of U.S. Rep. Ilhan Omar. Drazkowski, from Mazeppa, issued the challenge to U.S. Rep. Angie Craig (D-MN-02) during a press conference when he called for the withdrawal of Omar’s security clearance and for her removal from the House Committee on Foreign Affairs. This […]

On Tuesday, Mayor Pete Buttigieg’s of South Bend Indiana got his ass handed to him with a law suit filled by Judicial Watch for records pertaining to the creation of identification cards meant to assist people living in the U.S illegally. NationalSentinel – Judicial Watch, in a press release, noted that on December 16, 2016, […]