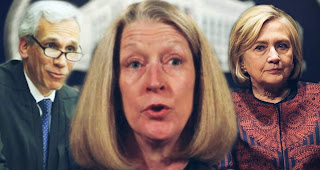 FOX NEWS – A federal judge sentenced former State Department employee Candace Claiborne to more than three years in prison for accepting thousands of dollars in cash and gifts from Chinese intelligence agents in exchange for information.

According to the Department of Justice, 60-year-old Candace Marie Claiborne tried to cover up years of contacts she had with Chinese foreign intelligence agents and thousands of dollars received in cash and gifts from same Chinese intelligence Agents. 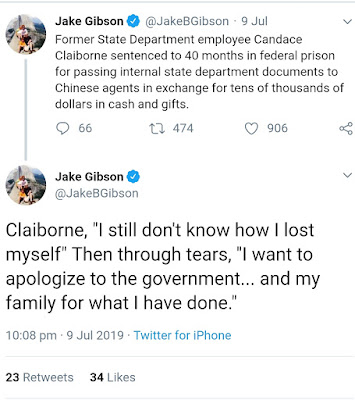 In a statement, Assistant Attorney General for National Security John Demers said “Candace Marie Claiborne traded her integrity and non-public information of the United States government in exchange for cash and other gifts from foreign agents she knew worked for the Chinese intelligence service, She withheld information and lied repeatedly about these contacts.” Prosecutors said that over a five-year period, Claiborne received “Chinese New Year’s gifts, international travel and vacations, tuition at a Chinese fashion school, a fully furnished apartment, a monthly stipend and numerous cash payments.”

Trump Issues Warning To Ilhan Omar, Others “Go Back To Your Country And Fix It”

Earlier, in what was widely denounced as a racist attack by most Democrats President Trump lobbed a huge ball of truth at a group of four Democratic congresswomen of color who have been critical of his administration’s policies. President Donald Trump defended his attacks on the four freshman Democrats at a White House event on manufacturing, arguing […]

Earlier in May, president Trump blasted FBI Director Christopher Wray for protecting the Democratic deepstate swamp. ….and the Democrat National Committee-The Democrat Party apparatus-has been caught using donor Dollars to Collude with Russian Intelligence to attack a domestic political opponent (me). The FBI has no leadership. The Director is protecting the same gang…..that tried to…. […]