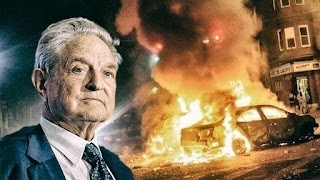 A petition demanding the United States government to declare American financier George Soros a domestic terrorist has gathered over 190,000 signatures, more than the required 100,000-signature threshold needed for the Trump administration to respond.

According to the PETITION, “George Soros has willfully and on an ongoing basis attempted to destabilize and otherwise commit acts of sedition against the United States and its citizens, has created and funded dozens (and probably hundreds) of discrete organizations whose sole purpose is to apply Alinsky model terrorist tactics to facilitate the collapse of the systems and Constitutional government of the United State, and has developed unhealthy and undue influence over the entire Democrat Party and a large portion of the US Federal government, the DOJ should immediately declare George Soros and all of his organizations and staff members to be domestic terrorists, and have all of his personal an organizational wealth and assets seized.”

Mr. Soros, 87, is a Hungarian-born billionaire and businessman who widely known for funding liberal advocacy groups and organizations, both domestic endeavors as well as initiatives abroad. He supported Mr. Trump’s rival during the 2016 race, Democratic candidate Hillary Clinton, and previously described the current president as a “con artist and would-be dictator.”

Rep. Dan Crenshaw a former United States navy seal officer took to twitter to blast Joe Biden’s reckless tweets towards President Trump with the following statements: “First, walls quite literally stop a virus. It’s kind of the whole point of a quarantine, for instance.   Second, assuming you meant this metaphorically, health experts like […]

House Speaker Nancy Pelosi and President Donald Trump have not spoken in more than five months, according to a Pelosi aide, something that’s even more remarkable given the crisis facing the country and the massive rescue packages moving through Congress. The two have not spoken since Pelosi stood up and left at an October 16 […]

The US recorded 518 new coronavirus-linked deaths in the span of 24 hours, according to data published Sunday by Johns Hopkins University. The record toll, higher than the previous day’s increase of 453, brings the country’s total number of deaths since the start of the pandemic to 2,409. The number of cases shot up […]

3 Replies to “Over 190,000 Patriots Sign WH Petition To Declare George Soros a Terrorist”