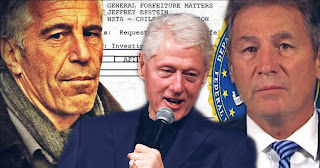 The current charges against Clinton’s right hand man Jeffrey Epstein is just the tip of the ice berg and a place holder to get him off the streets according to former FBI official Chris Swecker. He further stated that more charges are expected to hit Epstein in coming days.

According to FOX NEWS – A former FBI official said Monday that the federal indictment of Jeffrey Epstein is a “placeholder” for prosecutors and he expects a much larger “superseding” indictment to be forthcoming. An indictment alleging sex trafficking and sex trafficking conspiracy was unsealed Monday morning against the financier and registered sex offender. Prosecutors allege Epstein, the 66-year-old wealthy hedge fund manager arrested on Saturday, preyed on “dozens” of victims as young as 14, allegedly operating a “vast network” from 2002 “up to and including” at least 2005.
Court documents obtained by Fox News in 2016 showed that Clinton took at least 26 trips flying aboard Epstein’s private jet, known as the “Lolita Express,” and apparently ditched his Secret Service detail on some of the excursions.

During a phone call interview on fox news, President trump revealed to Sean Hannity that he has given Attorney General William Barr the green light to release Declassified Spygate Documents. Gateway Pundit – Trump praised Bill Barr and said he has given him all of the documents he needs to investigate the origins of Spygate. […]