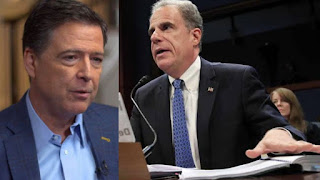 Why did Comey tell Trump privately that he wasn’t the target of an investigation but then refuse to say the same publicly? This is because Comey was in fact running a covert operation against Trump.

According to REALCLEAR INVESTIGATION, Justice Department Inspector General Michael Horowitz will soon file a report with evidence indicating that Comey was misleading the president despite assuring him that he wasn’t the target of an investigation, the former director was secretly trying to build a conspiracy case against the president, while at times acting as an investigative agent.
Two U.S officials who were briefed on the IG’s investigation into possible misconduct by the FBI said, James Comey was effectively running a covert operation against Trump, which started with a defenseive briefing he privately gave Trump a few weeks before his inauguration.
REALCLEAR INVESTIGATION also reported that Comey’s meeting with Trump took place one day after the FBI director met in the Oval Office with President Obama and Vice President Joe Biden to discuss how to brief Trump — a meeting attended by National Security Adviser Susan Rice, Homeland Security Secretary Jeh Johnson, Deputy Attorney General Sally Yates and National Intelligence Director James Clapper.

James Comey left, Barack Obama right Earlier, during an interview with The Post, President Trump made mention of making certain document pages known to the public if democrats launched probe into his administration. This pages he said will be very devastating to the democratic party. Seems those pages are about to be rolled out. According […]

MASSIVE CRIMINAL CHARGES ABOUT TO HIT COMEY, OTHERS OVER SPYGATE.