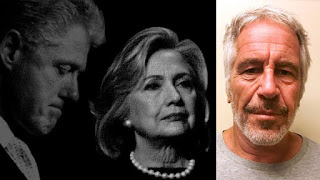 Americans waking up to check Twitter were greeted with the trending hashtag “#ClintonBodyCount.”
The phrase has since been used by conservatives to link the mysterious deaths of people in some way connected to Bill and Hillary Clinton, like the 1993 suicide of White House Deputy Counsel Vince Foster, and the fatal armed robbery of Democratic National Committee staffer Seth Rich in 2016.
The hashtag broke into the mainstream on Thursday, trending at number three in the US. Its emergence came after millionaire financier Jeffrey Epstein was found“injured and in a fetal position” on the floor of his New York jail cell just hours before.

When #ClintonBodyCount is trending on Twitter as a reaction to the story that Epstein “attempted suicide” you know people are hip to the game. They need him gone at all costs. ? pic.twitter.com/uFKsLk3EFu

ANYONE denying the concrete connection, between Epstein and the Clintons, better look at themselves in the mirror and ask:

Am I really defending a criminal family who has been testified against by victims of sexual assault? #ClintonBodyCount

I also believe that someone tried to murder Epstein. He needs to be under high security for his safety, and do bad people will finally be punished. #ClintonBodyCount

GATEWAY PUNDIT – Alva Johnson, a former campaign staffer when Donald Trump was running for president in 2016, claims that she was the victim of an unwanted and forcible kiss from Trump before a rally in Tampa. According to Johnson “Trump moved close enough that i could feel his breath on my skin when i […]