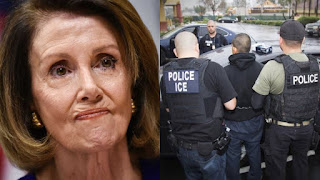 FOX 5 – U.S. Immigration and Customs Enforcement deportation officers arrested 20 people with final removal orders throughout San Diego County this week, the agency announced Friday.
In addition to those targeted in the operation, officers also arrested seven immigration violators, whom they took into ICE custody and processed for removal.

According to ICE report – Of those arrested during this operation, 85 percent had prior criminal convictions and/or prior criminal charges. Convictions for those arrested included drugs, weapons offenses, hit-and-run, driving under the influence, theft, domestic violence, evading law enforcement and fraud criminal offenses.
Those who were primary targets of this operation will be removed from the United States pursuant to their final order. Those without final orders of removal will be issued a notice to appear before an immigration judge and remain in ICE custody during the pendency of their removal proceedings.

BUSTATROLL – Judge Marcus Alfonso Paralapalos of the conservative 51st District Court of Warrants, has ordered the medical treatment files for Nancy Pelosi’s alcoholism unsealed and available to the general public. In a statement, Judge Marcus said “The public has a right to know if the Speaker of the House is undergoing treatment for alcoholism […]

WHISTLEBLOWER, HUNTER BIDEN ABOUT TO BE SUBPOENAED AS INDICTMENT GRIPS HEAD OF BURISMA HOLDINGS

Reality strikes Democrats show trial as head of Burisma Holdings was indicted this week in Ukraine by Ukrainian Prosecutor General. YourNews reports: The head of Burisma Holdings, the energy company on which Hunter Biden served on the board, has been indicted by Ukraine’s Office of the Prosecutor General for money laundering and corruption, according to […]